In a post-world: post-punk art now 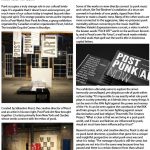 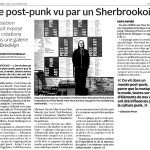 In a Post-World : Post-Punk Art Now brings together Canadian artists and American artists, many of whose works are linked to the ideology, ethics and aesthetics of the punk movement. Initially associated with the field of music, punk was notorious for its irreverent spirit and subversion of the established cultural and political structures. The works in this exhibition explore the links between the punk movement and various practices in current art.

Opening Thursday October 27, 6-10pm
The Invisible Dog Art Center
October 27 – November 6
Thursday to Saturday from 1 to 7pm, Sunday from 1 to 5pm
Tuesday and Wednesday: by appointment only
Closed on Monday

As early as 1978, the British group CRASS released the song “Punk is Dead.” We can affirm, however, that punk culture, thought to be dead and buried, has simply gone through various mutations and metamorphoses. Less raw and hard-hitting than its original form, the movement nonetheless continues to have a profound impact on our social mores. Any grandmother can now dye her hair purple, for example, and a soccer player with a mohawk hardly raises an eyebrow.

There are a number of aesthetic similarities between the punk movement and certain 20th-century artistic currents. With its rejection of established values, its strong sense of self-derision and iconoclasm, punk is closely related to Dadaism. Early on, many of its proponents were also influenced by Situationism. The manager of the Sex Pistols, Malcolm McLaren, frequently alluded to the emblematic texts of the movement and even declared, “It’s marvellous to use Situationism in rock.” In addition, the parodic appropriation of religious or political imagery on punk album jackets or posters is very much in keeping with the deviational spirit of Situationism.

The relationship between punk and the avant-garde is highly important; but how exactly has it influenced the visual arts? This question lies at the heart of our critical reflections. In a Post-World : Post-Punk Art Now reflect upon the vestiges of punk in current artistic practices.

This exhibition has been made possible, in part, with support from the Conseil des arts et des lettres du Québec and the Délégation du Québec à New York.