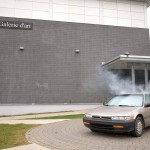 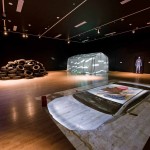 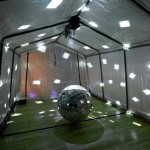 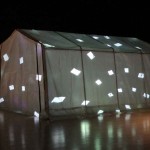 The Spaces of Self-Projection

The video practices of Sébastien Pesot were long based on single-channel videos that explored the formal possibilities of the medium. Over the last few years, however, he has turned his attention to video installations. This paradigm shift has led to research on the mechanisms of video presentation, allowing him to escape the rigid frame of the monitor or screen. For the exhibition Auto-, the artist grouped together several installations that shared a common theme: the interplay between the self-portrait (autoportrait) and the automobile. Seemingly poles apart, these two subjects are closely related for the artist, who bases his explorations on a form of introspection, questioning his identity as an artist, while making a parallel with the automobile as an autonomous entity. Through the self-portrait, a genre that pervades the history of art, Pesot is able to present himself through various poses and settings, providing in the process a unique glimpse of an era, which audiences will recognize as their own. In this exhibition, the artist uses the automobile as his personal space, but also for its plastic qualities, which serve as a support for various video explorations. This series of works undermines or reroutes the majority of the car’s connotations (power, style, etc.), its utilitarian functions or ability to create a feeling a belonging to a social group.

In the triptych Scopie, three television monitors present a car in profile, allowing the artist to execute a series of independent actions from one monitor to the next. Each of these split-image actions are different, but interrelated. The car serves here as a resonance chamber, becoming an instrument that enables the artist to explore the car’s range of sonorities, resulting in a highly unusual “mechanical” score. Pesot amuses himself using the roof as a drum, dragging a rake across the hood, making the driver’s door creak open and shut. The artist fiddles with the bodywork, which becomes a site of audio creation, echoing his previous installation Camera Orchestra.

In the installation Cinétique, the car’s roof becomes the screen, a flat white surface that serves as the artist’s canvas. Projected from the ground, the image retains the actual dimensions of the vehicle that the artist filmed from above. Inside it, he places various objects that refer to his real life: a doll belonging to his daughter, a saw, a hunter’s vest, yellow rope, which together form a contemporary, self-referential still life. Pesot is here affirming his status as an artist, man and father. With regard to the car’s function as a private space to be alone in, the artist’s actions remain relatively banal, perhaps because they evoke the daily routines of so many people. He polishes the hood, the rear window, leaves the cloth on the roof, then takes out the doll, the hunter’s vest, the pink backpack. He comes and goes, emerges from one door, enters another. He leans on the car, pauses, bites into an apple. These gestures, repeated in a loop, create the impression that the car is suddenly springing to life, as the blinkers and windshield wipers are also activated. The artist appears to be becoming one with the machine, as if it were an extension of his body, a space to exhibit his life or conceal unknown aspects. Other elements also appear on the screen, objects filmed by the artist and placed on the floor (pail and tool chest), echoing what is projected there and thus breaking the flatness of the surface support that the car has become.

Route oscillates between photographic and videographic representation. An aluminum plate presents the life-size outline of the artist, a negative image that suggests his nudity without revealing it. His silhouette is intercut at the head, thorax and genitals by screens, symbolizing the mental, emotional and sexual zones. The images projected within each of these spaces refer as much to states or conditions: hunger, desire, that which one reveals or hides, the emotional knots inside us, the body at rest. Route, it would appear, is the synthesis of Pesot’s explorations of the notion of self-representation.

Mobile, one of the pivotal works in this exhibition, uses a car shelter as a projection surface. A near-mythical object on our winter landscapes, the shelter here takes on a poetic cast. The swirling image is difficult to see at first, but after lingering over it we can distinguish a man dressed in black who is shovelling a path in the snow. The repetitive, quasi-choreographic gestures of the artist are multiplied by a device concealed inside the shelter. An immense mirror-ball revolves slowly, producing glittering reflections on the white canvas. Removed from its context, the shelter no longer serves as protection, but rather as a projection screen.

With humour and a touch of self-mockery, the artist again plays with the notion of the self-portrait in Pilote. Attached to the windshield of a modified car for children, the screen seems to have captured the artist, confining him within this closed space. It is interesting to note that in this self-representation the artist does not show himself under the best light. The mirror effect, reminiscent of a Rorschach test, distorts the artist’s image. It transforms him, makes him grotesque à la Hieronimus Bosch. Beyond these allusions, the artist evokes the desire of all children to act like grownups, to copy those things that are not yet within their reach. On the other hand, this work could be seen as reflection of Sébastien Pesot’s irresistible urge to return to the world of children, to freely revel in a form of artistic playfulness.

In this body of works, the artist is never entirely represented, as if showing a certain modesty about showing himself as he actually is. We catch glimpses of his body, which is sometimes distorted, truncated, minuscule—a dot on an immense white surface. Insofar as the car can be seen as an extension of ourselves, an image of who we are, Sébastien Pesot is exploring the many ways we represent ourselves to others, in this case by rerouting our “affective” attachments to the automobile. The artist’s numerous self-representational poses, moreover, open up his artistic practices, broadening his explorations of diverse video environments.